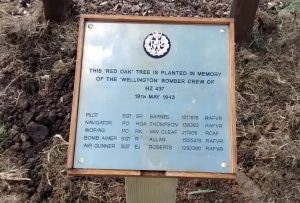 Today I am going to tell you the story of Raymond Van Cleaf and Sidney Roy Barnes.

Raymond was a cousin of Stuart Harlow. Stuart is here today to read the names of Raymond’s bomber crew.

We remember those from bomber crew HZ437 who lost their lives in Westbury in World War 2.

Members of his family have also joined us today and I’d like to welcome them all here. You may be puzzled why the crew names have been read out here in Westbury and why their story is relevant to our remembrance act today.

However, all will now be revealed through the story of HZ437.

Raymond Van Cleaf was brought up in Hamilton, Ontario ,Canada and he joined the Royal Canadian Air Force in January 1941 after being a Reserve since August 1940. He then commenced his training as part of the ‘Commonwealth Air Training Plan’ which was a plan to train aircrew from the Commonwealth for the European, Middle East and Far East theatre of war.

Sidney ‘Roy ‘Barnes was brought up in Portsmouth, Hampshire and joined the Royal Air Force Reserve in April 1941. He started his basic flying training in England before leaving for Canada in January 1942.

Although both Raymond and Roy were training in Canada at the same time they were both at different camps.

Roy did his winter Elementary flying training at an airfield called Caron in Saskatchewan in Central Canada and then went on to complete his Service Flying Training in the summer at Penhold, Alberta in Western Canada. It was in September 1942 that Roy finally gained his Pilot Wings.

Meanwhile by April 1942, Raymond had completed his two courses in Wireless and Air Gunnery at Guelph [ near his home town ] and Mount view [Eastern Canada] . He was then awarded his aircrew ‘ Wireless / Air gunner ‘ badge .

Both of them after training, then had to endure the crossing of the Atlantic by ship in a convoy to the United Kingdom. 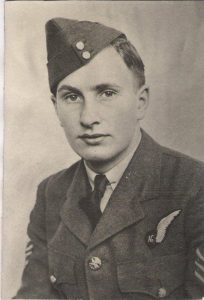 Raymond was the first to arrive on UK shores. He then had to undertake further courses for the ‘ European ‘ theatre of war before being posted to RAF Abingdon. It was here that he probably first saw active service whilst training on the ‘Whitley’ and then ‘ Wellington’ bomber. Christmas 1942 saw Raymond posted up to Yorkshire to carry out heavy bomber training on the Halifax’ bomber. After this training, he was posted to 102 Squadron RAF Pocklington for a short time.

Roy on arriving to the UK in Autumn 1942, was posted to RAF Harwell to learn his aircraft training on the Wellington bomber.

In April 1943 both of them were posted at RAF Harwell to train on the new MK10 Wellington bomber in readiness to ferry the aircraft into the Mediterranean theatre of war probably pre the ‘ Sicily ‘ invasion.

On the 19th of May 1943, 2 days after the famous ‘ Dambusters raid ‘, during a training flight, the new ‘ Wellington bomber’ HZ437 suffered a port engine fail in flight. They then flew 30 minutes on one engine before attempting to land at the diversion airfield of RAF Turweston. They were then told when on final approach to make a landing on another runway and, whilst in the final circuit to line up with the new runway the aircraft lost control and crashed in farmland next to Westbury.

All five crew lost their lives. Four of the crew were buried at Bicester cemetery and the fifth crew member was buried at Higham, his home town in Kent.

In 2014 after a year’s investigation, the family managed to contact Jacky Owen, who kindly allowed them to plant a ‘Red Oak ‘ tree – a tree native to Ontario, Canada – Raymond’s homeland with a memorial plaque to all the crew members of HZ437 near to the crash site.

A year later there was a dedication service on the newly named ‘Red Oak farm’ which was a nice lasting tribute to the crew and recently, the two families met up on the Anniversary of the crash after 73 years at Bicester cemetery.

The number of times I’ve driven by the entrance on the main road and never realised that association to the farm name – but now we all know why it has that name and can link back to what we’ve heard about today.

Please take a look at the pictures that Stuart has brought with him and think back to their sacrifice and, as they died serving their country, here in Westbury, it is right that we should remember them here today, just as we should remember and honour all those who fought to protect our freedom in war – all wars and not just the Second World War.

We try to remember what it was like, who was with us, and who did not come back. Some of those we may have known personally. We know that there was cost, and we do honour today to those who served, and those who died, for us and for the country we live in.

We also remember those currently serving in places of conflict putting themselves in harm’s way for our sake.

Let us pray that our dead will continue to be honoured and that we, and all people, may be able to hold high the torch that they can no longer carry. We in Westbury will remember them.