On Remembrance Sunday in Westbury this year we commemorated the crew of Wellington Bomber HZ437 that crashed near the village killing all five crew.

The family had asked that a permanent memorial be placed in the church and this is now mounted at the tower end of the church if you would like to visit and view.

The family took part in the service with poems, a Scottish lament and a moving account from one of the relatives whose father was on board the plane.

Representatives from both the RAF & US military also took part in the dedication and laid wreaths at the outside memorial. Nearly 90 people were present in total to witness this permanent piece of history for the village. 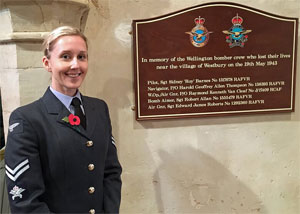 Sadly, later on the same day we heard that James Allan, brother of Sgt Robert Allan had passed away (aged 95) after Madge had spoken to him about the wonderful service dedication. James said he was ‘sad, delighted and so proud that the crew and his brother had been remembered by all of us at the special service’.

We remember those from bomber crew HZ437 who lost their lives in Westbury in World War 2.