Westbury, meaning ‘burg’ fort or castle, has existed since before the Domesday book, written in 1086, and the following is an extract from a presentation on the history of the village given in May 2008.

Further information about Westbury can be found on the British History Online website. 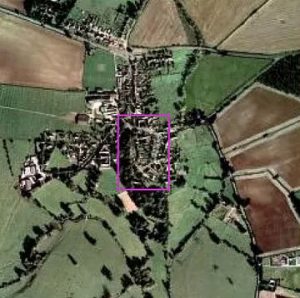 An Aerial view highlighting Orchard Place, the area of the Saxon Entrenchment Camp 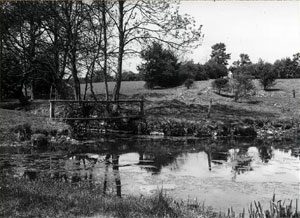 Snippets from the distant past

Poverty – An issue through to the 20th Century

In the 1960’s older residents in the village recalled walking 4 miles to and then back from work in the fields and having nothing but bread and milk for their dinner. Several poor societies, The Wilds, and later The Westbury Benefit Society and the Loyal Barrington Lodge of the Independent Society of Odd Fellows. Charitable work is still carried out in the village today through The Wilds and the Village Club, but about good causes rather than the poverty of the past.Up until the 1930’s children turned up to school with no boots and some were off school for months with prolonged illnesses.

Names from the past 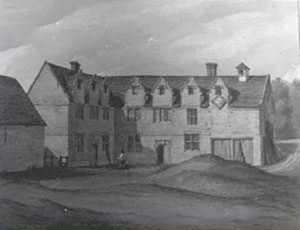 The Price family ‘devotion’ to the village was expressed in many practical ways.

Lord Barrington died in 1901 and was buried in Westbury. Wilfred Turner, the son of the 1870’s Blacksmith recalled the funeral “Westbury had a lovely choir in those days. I was a kid and we had to go and sing at his funeral. I always remember the good feed we had down there!” The grave was lined with lillies of the valley and freesias from the Manor hothouses.

Possibly the Post Office cart/taxi for trips to Brackley

At the time of the Scotts arrival, the village had a Butcher at Yew Tree House, a Post Office and Store at the Old Post Office, a Carpenters and Wheelwrights shop near Mill Farm on the High Street, a Smithy adjacent to Elm Farm House, a Shoe and Boot maker 51, White City, a district nurse in a White City Cotttage and a very successful Flour Mill. There was a Baker still in the 1890’s in a cottage down Mill Lane, but by 1900 the village was reliant on bread from Tingewick if they could not bake it themselves. Fish came from several sources, including the Post Office who fetched a barrel of herring from Banbury.

Westbury had a pig insurance club and at the Annual General Meeting in 1903 the accounts showed 69 pigs insured and one new member. There were no losses that year in 1900. £3.15Od had been paid to members whose pigs had died.

The Barracks was home to Mrs Johnson, lacemaker. 1913

May Day celebrations early 1900’s beginning at the Barracks, followed by parading the ‘Garland’ around the village

And the story continues in pictures: